- November 04, 2019
Precilla, Regina and Amapola Parker, otherwise known as Cilla, Reggie and Poppy, were born just a few minutes apart, in the seaside town of Fairfield, just fifty miles from the city of New York. They grew up being cared for by their father, in a beautiful four bedroom home close to the beach, where they would spend most of their free time.

The girls had lost their mother in a fatal car crash, when they were just five years old. They all had retained strong memories of her and the wonderful career she had in the fashion industry. Their father had seen to that; the hallway in their home was like a photographic gallery, lined with photographs of their mother wearing the most elegant clothes, mostly designed by their father.

It was no wonder the girls had decided, before they even left school, they would follow in her footsteps. Though Reggie was to be an exception. From a the tender age of two she had shadowed her father so closely, it was almost a foregone conclusion she would end up behind a drawing board, rather than on a runway like her sisters.

Poppy had arrived home a few days ago and they chose to meet at The White Panther for a quick catch up. Both Cilla and Poppy had been given some time off from their busy schedules and had spent the day shopping at Fleur & Ruben, their favourite boutique. Reggie had come straight from a cocktail party, but it was still early so the club was quiet and conveniently situated on her way home. Cilla had phoned ahead of time to organise a cheese platter and their drinks were being prepared. 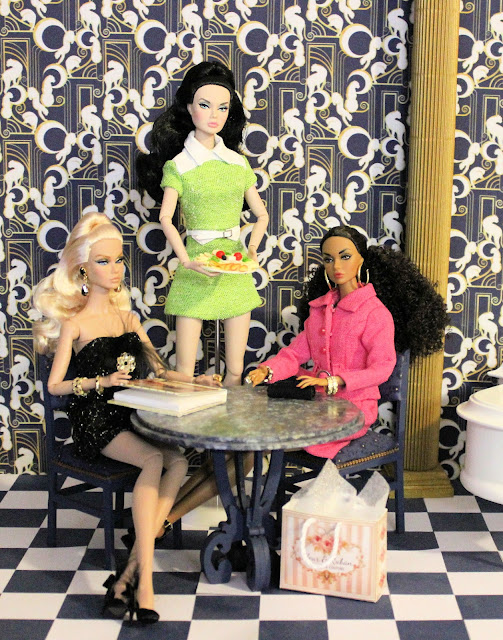 Cilla Parker (Chiller Thriller), was the first born triplet. She became a runway model for the Luxe Agency, and will eventually be a successor to Vicky when she steps down from her position as head model. This is providing Cilla can get over her refusal to travel far from home. At present, she wants to keep an eye on her father, who's health has gradually declined since the death of her mother.

Reggie Parker (Midnight Decadence), the middle child. Was a former runway model, but is now an admired designer in her own right and founder of the hugely successful Regina label. Reggie has worked extremely hard to get where she is, fueled by a strong desire to make her father proud.

Poppy Parker (Gardens of Versailles), the youngest of the trio, spends as much time on photoshoots in London, Paris and Rome, as she does in her penthouse apartment, which she shares with her sister Cilla. Poppy loves being in the limelight and enjoys travelling the world, even though she's living out of a suitcase most of the time.
Chiller Thriller Gardens of Versailles Midnight Decadence Poppy Parker

Thank you for stopping by my blog and taking the time to comment. I always enjoy the interaction with my readers.

Food for the Soul

Fashion, music and art, especially from the early 1920's, when corsets were discarded, hemlines rose, dance music was popular and art deco at it's peak, really makes me wonder if I wasn't born at the wrong time . . . or perhaps I just have a strong feeling of déjà vu.